﻿Get ready to rumble! 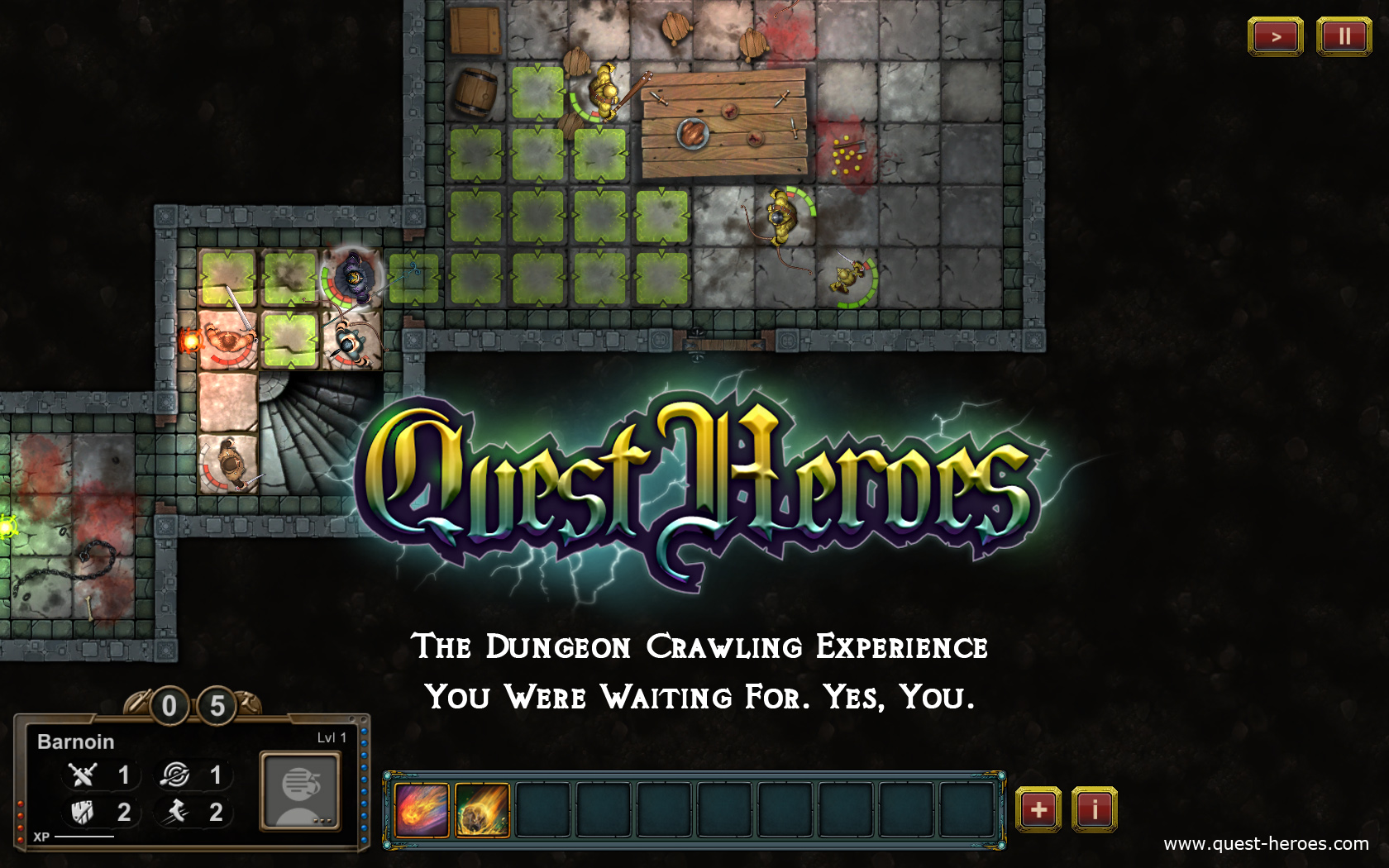 It lives! The Quest Heroes website has gone live. At long last, we can tell the world about the epic project we've been working on for nearly a year. We hope you'll be as excited about it as we are!

What is Quest Heroes ?

Many of you will immediately understand what sort of game this is just by looking at the screenshots plastered all over our site. But for those of you who might be going, "Wait, what?" here's the deal...

In the board-gaming world, there is a distinct genre: the Team Dungeon Crawling. Almost everybody agrees that the venerable HeroQuest (published 25 years ago by Milton Bradley in collaboration with Games Workshop) is the father of it, and the granddaddy of the adventuring board games we know today. Since then, many others have been released at a pace of one or two a year. Among the latest and most popular are titles such as Descent 2nd ed., Mice & Mystics and Super Dungeon Explore. Several more are anticipated in 2015, including Dungeon Saga: The Dwarf King Quest or Abyss: Perdition's Mouth.

In these sorts of games, players (usually four) each play a different hero. The typical party consists of a barbarian/warrior, an elf/archer, a wizard, and one other member. Once the party is formed, the adventurers typically delve into a dungeon for one heroic reason or another, slaying monsters, finding treasure and artifacts, avoiding traps, and dealing with other scenario-specific threats. The adventures are turn-based with some old-school pen-and-paper RPG elements that have been simplified for use in a board-gaming context.

With Quest Heroes, our aim is to fuse all the things we love about this board game genre with the best of the computer and mobile gaming world. While attempts like this have been made before, they've never lived up to our expectations. That's where we come in, because we live by the credo that if you want something done right, you have to do it yourself. And we strongly believe there are others out there who want to play a game like this.

● A rule set totally compatible with real life board-gaming. We will release a free print-and-play version at a later stage of the development process.
● A not-so-serious medieval fantasy world in which, for instance, the mayors are exploiting zombies to clean out their sewers and sending adventurers to teach them a lesson when they go on strike (even the dead feel entitled to at least one day off per week).
● You manage a pool of heroes: before each quest, you select the members of the party.
● Ultimate party-building freedom. If you'd rather have an adventuring party made up of three wizards and a thief instead of the traditional warrior-archer-dwarf-wizard combo, then go for it! It's totally up to you.
● No frustrating class-based gear limitations. Characters can equip and use any weapon or equipment as soon as they have the required stats, regardless of their class.
● Permadeath. However, there are resurrection scrolls (extremely rare, and usable only right after the death) and you can pick up a dead character's gear, so nothing is ever completely lost.
● Heaps of magic, monsters, missions, skills and items... indeed.
● Randomly generated quests.
● Multiplatform: Windows, Mac OS, Android and iOS.

We'd also love to tell you more about the game's special rooms and their tricks, the AI and strategies used by groups of monsters, bosses, traps, secret passages, environments, architecture, dual wielding, victory conditions, and the list goes on. Then again, this post would end up being as epic as the game itself if we told you everything now, so let's save some of the fun for future posts!

Where are we now?

We've already put in about the equivalent of seven months of full-time work. So far, we have a great character animation system, an engine that works beautifully on desktop as well as mobile platforms, an innovative lightning system, an AI that's both smart and crafty, a fully functional melee and ranged combat system, four types of weapons with different abilities, twenty-five weapon designs, five equipment categories, around forty items, fourteen characters and foes (heroes, monsters, and NPCs), eight spells, our very first dungeon generation engine, three written quests, three different victory conditions, and so much more!

But there's still a lot of work to do. If everything goes well, we'll release Quest Heroes in the second half of 2016. Of course, preliminary versions will be made available, too. We've yet to formally decide, but they might include betas, demos, and an early-access version.

While we'd love to dedicate our lives to Quest Heroes, we have families to feed and bills to pay. So, like many things, it all comes down to money. We aren't going the Kickstarter route, at least not yet, but rather, we're looking for a publisher ready to fund the rest of the development. And the best way to convince a publisher that Quest Heroes can succeed is to show them how many people can't wait to get their hands on it! So, if you haven't done so yet, please follow us on Twitter. That's the best way you can help the project right now! And of course, it wouldn't hurt to like our Facebook page and register on our forum as well! TYIA!
7 years ago by dTb
share    tweet    share    pin    stumble    submit
Newer entries >